Venezuelan citizens cross the Simon Bolivar international bridge from San Antonio del Tachira in Venezuela to Norte de Santander province of Colombia on February 10, 2018. Oil-rich and once one of the wealthiest countries in Latin America, Venezuela’s economic collapse has created the biggest migrant crisis in the Americas. / AFP PHOTO / GEORGE CASTELLANOS

At least 500,000 people have fled Venezuela this year. That’s the lowest estimate around. Colombia says that over a million of them are living there now.  Venezuelans have been trickling out of the country for at least 10 years. But the last two have been an exodus. Don’t blame it on weak oil prices or high inflation or the CIA. Blame it on the ruling party — the Socialists United of Venezuela (PSUV). Their experiment of turning Venezuela into Cuba is working, only Venezuela is in much worse shape than the closed world run from Havana.

“PSUV is a kleptomaniac criminal party. They have no ethics,” says Martha Convers. She left her home on Margarita Island in 2004 after her family was robbed twice at gunpoint. She lives in Massachusetts with her husband and daughter, a local college student.  She says she has family and friends in Caracas. “Venezuelans have no hope in their leaders. You really don’t know what is going on there because everything is controlled by the government. The only way to know is through word of mouth. It’s hard to know what is true and what is not.” She says she has a group of high school friends with whom she maintains contact via Whatsapp. “Everybody is leaving. These are 50-year-olds. It is hard to start a life in a new country. But I know they are leaving in droves,” she says.

Venezuelans in the country don’t want to speak on the record. They are afraid the government, activists paid by the government, or worse — the Bolivarian Intelligence Service known by the acronym SEBIN, will pay them an unwelcome visit. Their chief is affectionately known as ‘220’ after the voltage applied to your genitals in between bouts of being forced to eat human excrement.

One former technician from state-run oil company PdVSA said the production numbers they issue are fake. He is now living in Colombia. The company entered in a restricted default in November. PdVSA is in worse shape than the market thinks. 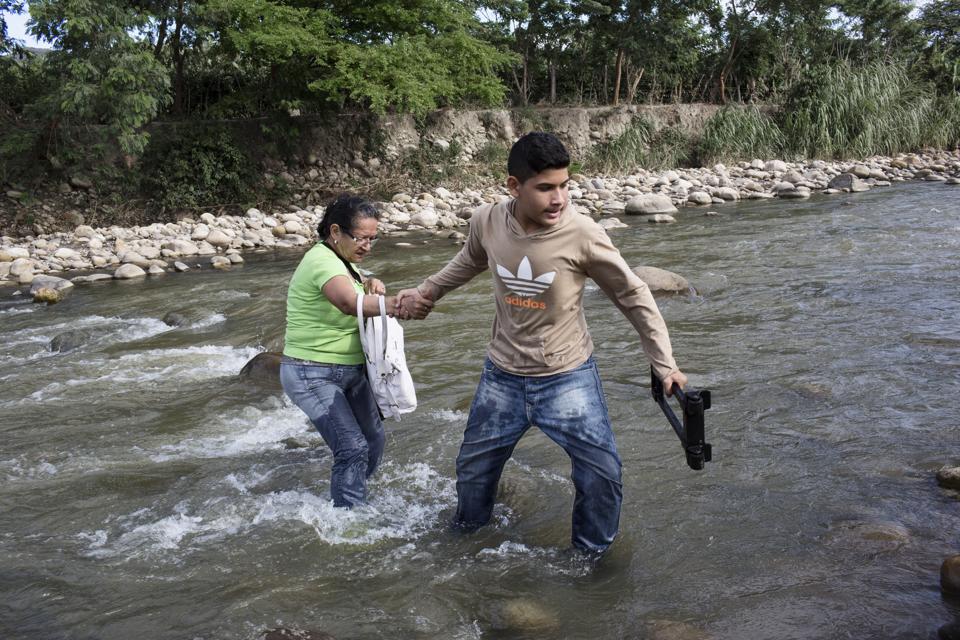 San Antonio International Border; Cúcuta; Colombia is ground zero in the Venezuelan migrant crisis. The border town is also overrun with Colombian drug gang ELN and they are recruiting desperate Venezuelans. Colombia has already arrested some for terrorist activities, according to press reports. (Photo by Nicolò Filippo Rosso for The Washington Post via Getty Images)

Another Venezuelan, a doctor from Clinicas, a private hospital in Caracas, confirmed that medicine is indeed in short supply. “Doctors and nurses are leaving. It will get worse,” he says, unwilling to give his name on the record for fear of being reprimanded by the government.

Another doctor at the Hospital Universitario in Caracas, the largest public hospital in the city, said many rooms are just used for beds for the sick. Care is another matter.

“Every day I have a patient talking about leaving for Bogota, for Chile, for Panama, for Spain…they just need a final exam to leave,” one doctor says. “They are young couples with no security here, no jobs and those who do have jobs have low wages.”

The largest migrant crisis in the hemisphere isn’t happening because of war or famine, but because of political malfeasance. Opposition voters will never have a kind thing to say about PSUV. To people like Convers, they are just thugs. The U.S. Treasury Department calls Vice President Tareck El Aissami a “prominent drug trafficker.” But assuming they are no different than any other political party — with good guys and bad — one thing can be said about PSUV: their stubborn adherence to their Marxist post-colonial fight between the colonized victim and the colonizer has destroyed what was once a country people migrated to. Or, if many Venezuelan watchers are correct, then PSUV is indeed a largely criminal enterprise not interested in a political project of any sort, per se, but interested in making money through currency arbitrage, drug trafficking and controlling the court system.

As a result of PSUV’s actions, Venezuela is the biggest failed state in South America. It is now home to the biggest migrant crisis the Americas has seen in a generation at least.

“The economic and humanitarian crisis in Venezuela is perhaps the worst that the hemisphere has seen in modern history,” says Dany Bahar, a fellow from the Brookings Institution, who recently wrote that the refugee crisis in Venezuela will soon rival that of Syria’s. “It’s not about political ideology. All you have to do is look at their decision to pay Wall Street bondholders instead of using what little money they have to import food and medicine. It’s not about social justice. That’s just a facade to them,” he says.

Often times, stories about refugees — particularly those from the Middle East — are political ping-pong matches. Migrants are used as a means to score political points, or promote an agenda, whether it is for military intervention or deeper open border policies that can divide an electorate. Venezuela is different. There is no political narrative to latch onto other than the fact that president Nicolas Maduro and PSUV are destroying the country. Washington has sanctioned Maduro and other political figures because of the political crisis. PSUV has shut the opposition out. Maduro has banned some of them from running for office. This was once a democratic state.

But in Venezuela, there are no real political points to score against a political opponent. And, perhaps, for this reason, Venezuela’s mass exodus into surrounding countries is not discussed in the same vein as the North African and Middle East migrant surge into Europe.

“Nobody even agrees what the refugee numbers coming out of Venezuela really are,” says Vanessa Neumann, president of Asymmetrica, a consultancy on strategies for corporate clients and governments to dismantle illicit trade. She was in Bogota two weeks ago, she says. “Colombia says 1.7 million Venezuelans are living there as of August of last year and estimates are that hundreds of thousands have come in after that until Christmas. They are selling gasoline, they are putting their children up for adoption ,” she says. 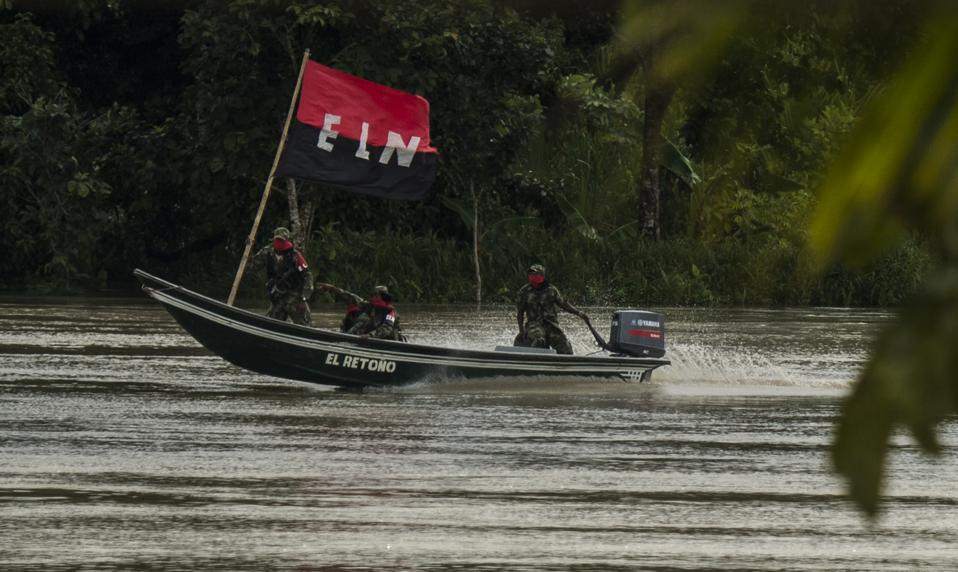 Members of the National Liberation Army (ELN) are getting Venezuelans involved in Colombian politics and now Colombia wants stricter border controls. Venezuelan refugees will do any job a local can do, but for a third the price, according to Asymmetrica. The country is now home to over 1.7 million new Venezuelan migrants. (Photo by LUIS ROBAYO/AFP/Getty Images)

In Cucuta, a Colombian border town, Venezuelans sleep on blankets on the streets. There is a tent city there that costs about $4 a week or so, a lot of money for a Venezuelan. Some have walked for miles. Others paid for group transport from professional people smugglers.

The Colombians are at wit’s end. The government of Juan Manuel Santos is asking Washington for money to help resettle all these people.  Santos’ political rival and ex-president Alvaro Uribe reportedly wants to take their United Nations in dues, some $316 million, and give it to the Venezuelans to set up a national program of reintegration.

The Venezuelan government that controls the food distribution program in the country is letting Colombian Marxist guerrillas from the National Liberation Army (ELN) over the border to help hand out food to people in the villages nearby. On the image of the food boxes are pictures of Maduro raising his fist and PSUV’s deceased godfather Hugo Chavez, along with an ELN sticker advertising their radio station. They are using it as a way to recruit fighters, Asymmetrica analysts on the ground believe. And so does the Colombian government. Some Venezuelans participated in recent terrorist attacks in Barranquilla and Cucuta, according to local press reports.  Santos wants to tighten the border with Venezuela. His foreign minister, María Ángela Holguín Cuéllar, is supposedly sympathetic to Maduro, so she is more inclined to cover up the immigration crisis, says Neumann.

“It’s hard to believe that in my lifetime we have gone from being one of the richest countries in the Americas to one of the poorest and it’s getting worse,” says Neumann, a dual U.S.-Venezuelan citizen.

Colombia is now sending troops to Cucuta. Last week, the government proposed a $60 billion rescue package for Venezuela if Maduro resigns, Reuters reported. The problem might not be just Maduro. This is all on PSUV.

PdVSA’s thinning oil production is going to China and Russia to pay debts. A hard default is imminent. PdVSA is Venezuela’s only cash cow, and the Russians and Chinese that have been bailing it out in one way or another for the past three years seemed to have lost interest. China’s Sinopec filed a lawsuit against PdVSA for late payments and deliveries. 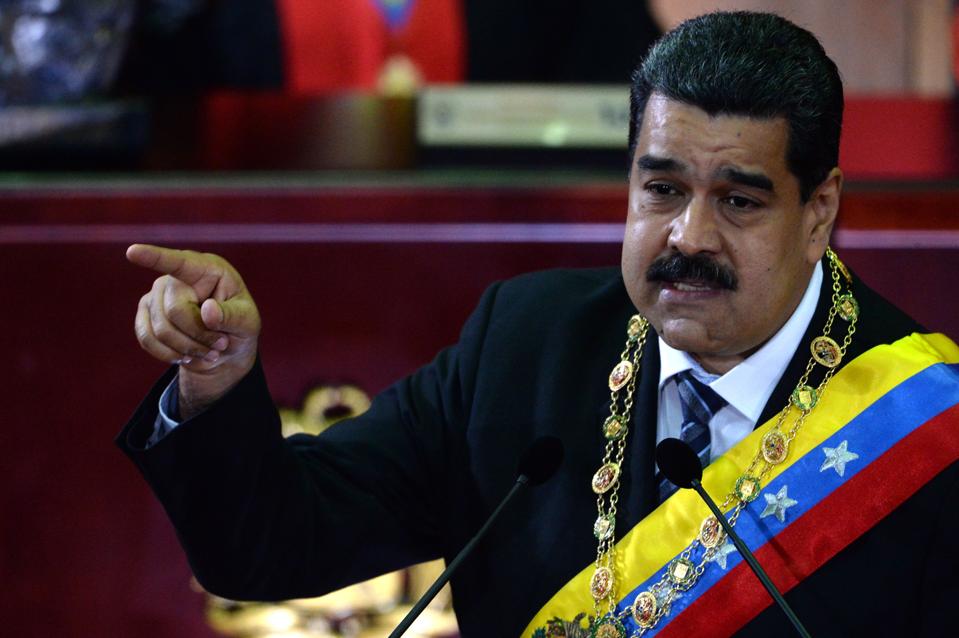 Venezuelan President Nicolas Maduro speaks during a ceremony in the opening of the judicial year at the Supreme Court in Caracas, on February 14, 2018. Maduro has assured that there will be national elections on April 22. Many opposition leaders were banned from running for office. Photographer: FEDERICO PARRA/AFP/Getty Images

“It’s like you are jumping out of the 20th-floor window and someone on the 15th asks you how’s it going?” says Bahar. “Well…so far so good,” he says. “This economic crisis has led to a refugee crisis like nothing in the Americas. It will get worse so long as PSUV is in power.”

In Massachusetts, thousands of miles from home and from crisis, Convers says that she’d go back if the country’s leadership changed. “There’s got to be a change of mentality down there,” she says. In March, she and local activists from the Venezuelan community will be boxing up hundreds of shoes to send to her native country. She launched her Shoes for Venezuela project in November on Facebook.

Some Venezuelans, including old and new expats, cite white knight billionaire Lorenzo Mendoza, CEO of brewing giant Empresas Polar, as the type they’d like to lead. They want an outsider with a financial stake in the country’s success. This week, though, Mendoza said he was not running, Reuters reported.

Bahar recommends that multilateral organizations, such as the World Bank and the Inter-American Development Bank, together with donor countries—including the U.S.—provide financial support to countries receiving Venezuelans.

Meanwhile, inflation is quadruple digits. A few bucks will make you a millionaire in Bolivars, the near-useless currency of Venezuela.  Some people, though, are willing to tough it out and won’t add to the booming migrant tolls.

“It’s a beautiful country,” says the Clinicas doctor who wished to remain anonymous. “I’ll stay here until my dying day.”

For media or event bookings related to Brazil, Russia, India or China, find me on Twitter at @BRICBreaker